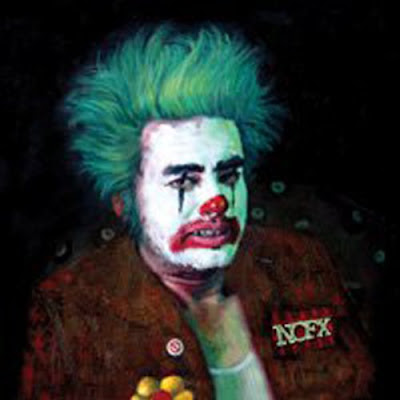 Cocaine addicted clowns and songs about a holiday to celebrate addiction… sounds like your typical NOFX release. When I heard that NOFX was going to release “Cokie The Clown EP”, featuring 5 unreleased songs that was recorded during the “Coaster” sessions, I got to admit, I was pretty stoked. I actually liked “Coaster”, and think it may have been the best NOFX release since “So Long And Thanks For All The Shoes”.

From the moody title track (possibly a metaphor for any drug addicted entertainer?) that features Melvin singing a decent amount, to the high energy Fermented and Flailing, I was actually really surprised by how solid Cokie The Clown is, and am wondering why these songs didn’t make the “Coaster” cut.

The only song on here I’m not a big fan of is the acoustic version of My Orphan Year. Anyone familiar with Coaster will remember one of the most heartfelt yet depressing songs that NOFX has ever written. The acoustic version lacks the same energy and thoughtfulness, as Fat Mike’s voice is much more tailored for emotional yells as opposed to subdued singing, and the moodiness of the electric guitars surpass the almost upbeat acoustic.

So is Cokie The Clown Worth it for the other four tracks? Damn straight it is. One of my favorite EPs released this year.

Possibly Some Effects:
Nofx – Coaster
NOFX – So Long And Thanks For All The Shoes
NOFX – War On Errorism