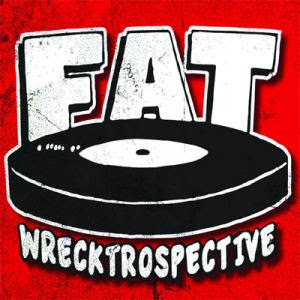 San Fransisco’s Fat Wreck Chords is pretty much a (punk) household name. Fat Mike of NOFX’s label helped change the relationship between bands and labels by offering one record deals, allowing a band to move on from the label after an album without any bullshit contract obligations and has been operating for almost 20 years now. To commemorate the past 20 years, Fat Wreck released a 3 disc box set called “Wrecktrospective”.

The 1st disc is a 33 song greatest hits collection, containing tracks from Fat Wreck alumni such as NOFX, Propagandhi, Rise Against, etc. Most of these songs you can probably find on Fat Wreck’s website under the MP3s section (which by the way, is an amazing section. I remember going to Fatwreck.com when I first started listening to punk nearly 10 years ago to discover more bands).

The 2nd and 3rd discs are where the meat is. The 2nd disc contains 28 demo versions of songs that we’ve come to love including The Soviettes, Lagwagon, etc. It’s pretty cool to hear the much more rawness in some of these songs. The 3rd disc contains all of the songs that were released through the Fat 7-inch Club, where the label would send a subscriber a brand new 7-inch every month. If you weren’t part of that, you’ll hear 27 new songs from the likes of Randy, The Vandals, and the Lawrence Arms just to name a few.

There is one bonus included in this box set, and that is a poster with all of the Fat releases on the front, and on the back the label asked it’s roster to talk about the moment when they first got signed (the responses are pretty funny).

One of the most consistent labels in putting out solid releases, you’ll definitely find something on here that you’ll like.