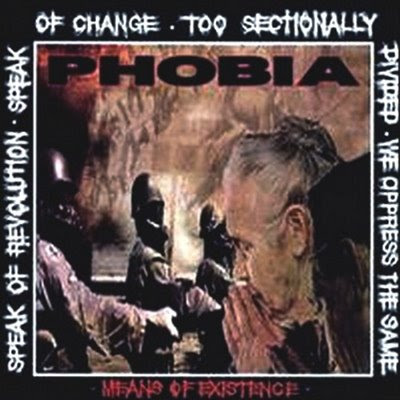 I don’t really listen to a lot of grindcore. The constant double bass drum, cookie monster vocals, and a lot of metal influence makes most grindcore kind of repetitive to me. However, when I saw Phobia open for Municipal Waste a few months back, I was completely blown away, and had to check out some of their recorded work.

One of the earlier releases from Orange County’s Phobia, “Means of Existence” is one hell of a heavy hitting album, only to be held down by the low production quality. Usually, production isn’t a huge deal to me, but with music this heavy, it often sounds muffled (you can really tell the difference when you listen to some of their later albums).

Still, the songs on here are pretty solid, and are surprisingly developed (a grindcore song passing the 2 minute mark? Surely you jest.) Fast as hell, political, and pissed off, if you’re going to listen to some grindcore, Phobia may as well be your choice.

P.S: This album doesn’t really do the band’s live show justice. If they come around, just go see them, you won’t know what happened.