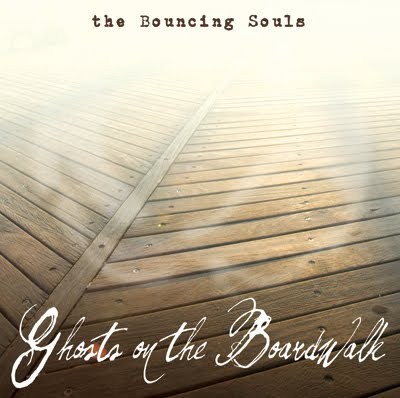 The Bouncing Souls and I go waaay back. Easily one of my favorite bands and home-state heroes since I’ve first heard their “Self Titled” when I was just getting into punk rock nearly 11 years ago, have always had a special place in my musical listening heart.

Trying something a bit different in 2009, the Souls decided that they were going to release one song a month. While some people seem to love this format, I completely and utterly despise the once a month format. In addition to wanting to hear more than one song at a time, I believe the flow of an album could make or break the record. I found myself not liking many of the songs the Souls released last year, but I decided to give it another chance since they decided to release them on a CD format called “Ghosts On The Boardwalk”.

Let me just say, by having them all on one album with a track listing that flows makes “Ghosts On The Boardwalk” a million times better. The album starts off strong, kicking in to the high energy “Gasoline” and “Never Say Die” (some standard Souls songs). “I Think That The World” is probably one of the most upbeat Bouncing Souls around, while title track “Ghosts On The Boardwalk” is one of my personal favorites, and a standard mid tempo Souls song about clearing your mind in a way that only Jersey kids would probably understand (god I miss the beach). “Badass” is a throwback to the “Good, The Bad, And the Argyle” days, and is one of the most fun Bouncing Souls songs I’ve heard from these guys in a very long time.

At this point, the weaker half of the album begins to set in. The songs are good, and I dig them all together, but it seems like the Bouncing Souls are trying too hard to sound like Bruce Springsteen (if I want to listen to some Springsteen, then I will). Still, even though the tunes are a bit slower, they are still catchy and are solid, but I can see myself skipping over them after a few spins. The album doesn’t really pick up again until the 2nd to last track “We All Sing Along”, which is your standard Bouncing Souls anthematic theme.

A solid release once thrown all together, if you didn’t like the monthly or vinyl format, definitely check out “Ghosts On The Boardwalk” in it’ s entiry.

P.S: I am saddened that I missed Home for The Holidays this year with the Souls, but tickets were waaaay too much money. After fees, like $36 dollars for a punk show? I think not.