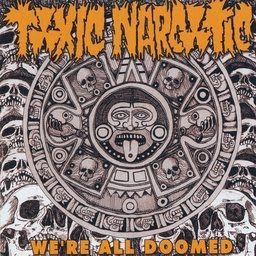 I remember when I first discovered Toxic Narcotic. I was radio DJing with my friend up at our college radio show (which had a total of 3 listeners on a good night… seriously) when we were trying to discover some new punk bands. My friend pulled out Toxic Narcotic’s “We’re All Doomed” and suggested we try it out. From the look of the cover, I was expecting some Voodoo Glow Skulls type ska, although the little sticker contained two sentences describing the music as heavy.

Nothing could have prepared me for what I was about to experience: the most heavy, cynical pissed off punk rock my little freshman ears have ever heard. Seriously, where have you been in my high school days, Mr. T. Narcotic?

With lyrics such as “5 billion people must die/that’s the only way to save the wildlife” and “everyone has problems its never gonna stop/here’s a good solution – shut the fuck up“, Toxic Narcotic’s “We’re All Doomed” became my blast beat filled, nihilistic, no ambition go-to album that day… and you know what? 7 Years later, it still is.

President’s Day Mix (A Song for Each President) Pt I.