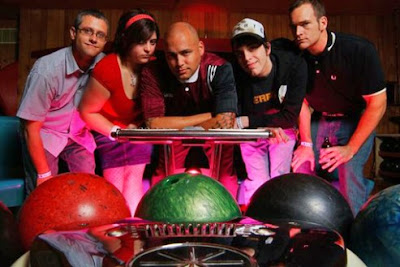 On Saturday night, I headed down to Bordentown, NJ’s Record Collector in order to see an in-store performance by home state ska heroes Hub City Stompers. The vibe was a strange one: there was a hotdog and popcorn vendor, seats for people to sit down, and two sections (an upper, where the band and a few dedicated fans were, and the main, where the majority of the crowd stayed and calmly watched). I was bummed at first, because I thought there wasn’t going to be any dancing (barely any room), but once the band started, myself and a few others were up front and moving.

Hub City Stompers would also play two sets, with a short break in the middle (little odd, but more songs = no complaints here!). The band was as tight as ever, and played songs spanning across all of their releases. Whoever constructed the setlist did a solid job as well; I’d imagine that two sets would be difficult to put together (don’t want to use all your energetic songs in the beginning but you don’t want to bore the crowd as well).

They played some newer material (well, new for Hub City Stompers, which translates in been-playing-these-songs-for-a-while-now-but-it’s-not-recorded-and-will-take-us-392-years-to-record) including Shallowed Be (a shot at organized religion) and one of my favorites, Pants Music (a shot at the emo scene, with the oh so heart touching chorus of “Your music sucks”).

This Goes Out To My Jersey Crew:
Hub City Stompers – Ska Ska Black Sheep
Ruder Than You – Big Step
The Slackers – Self Medication

What Song Did Less Than Jake Have In Their Head?