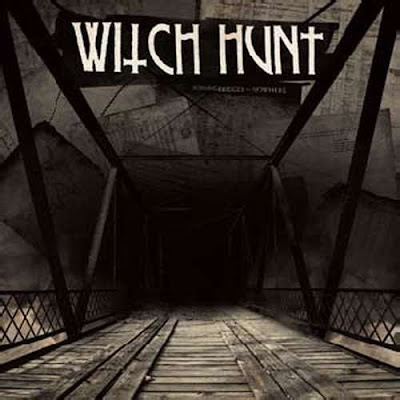 The whole female/male dual vocals found in crust punk is incredibly difficult to pull off. The general idea is to take the usually harsh dude’s vocals and have it melodically mix in with the (slightly) less harsh and dudette’s voice. The problem is too many bands simply switch vocal duties in a call/shout back manner rather then blending the voices, giving the band more of a B-52s vibe than anything with melody. There’s nothing wrong with that approach, but once in a while it would be nice to hear some harmonies.

Philly’s Witch Hunt used to do a more switching role back on “Blood Red States”, however on their latest release “Burning Bridges To Nowhere”, they’ve got the melodic crust (how’s that for an oxymoron) down to a god damned science.

I really dug “Blood Red States”, but let me say, “Burning Bridges To Nowhere” blows that album out of the water. The music remains dreary and heavy, but much more catchy this time around as heard on songs such as Everyday, Silence, and the title track. They haven’t completely abandoned their crusty noisy roots, with songs like Blind Eyes Lead Blind Lives and Septa Death bringing the brutality to full gear.

Lyrically, I usually have a hard time relating to crust punk. Sure, I agree with the politics, but usually the words are so impersonal and simply shout empty anti-globalization slogans without putting any real meaning behind the lyrics.

Witch Hunt truly captures the frustration of living in such a fucked up world where religion kills, corporations rule, and that capitalist Obama is considered a socialist. Anyone pretty much fed up with nothing changing could easily relate to the title track’s chorus: “if I had a choice/I’d give up my voice/who wants to scream forever” or for those of us who only know how to express ourselves through music, Silence’s chorus “my words won’t hurt you/but my songs will us”.

One hell of a solid album, and even if you don’t usually like crust punk, you should definitely give Witch Hunt’s “Burning Bridges To Nowhere” a chance, as it still remains heavy as fuck but melodic as hell.