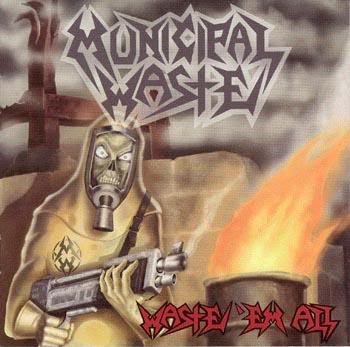 I’ll admit it, I got into Municipal Waste later in the game, only really starting to listen to them in the past 4 years. In that time however, the Waste became one of my favorite bands, both on stage and recorded work.

With 16 songs in around 17 minutes, Municipal Waste’s first studio album “Waste em’ All” is ball upper cutting, eye gouging, wholesome family goodness. For those unfamiliar with Richmond crossover thrashaholics Municipal Waste, “Waste em’ All” is a damn good album to start out with. Playing music in the spirit of crossover pioneers DRI, songs such as “Mutants of War” and “Drunk As Shit” show what this band is all about: partying and destroying everything in the process.

The Top 5 Most Overrated Bands