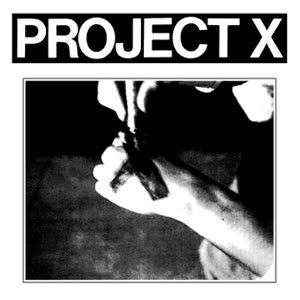 New York City’s Project X’s “Straight Edge Revenge” EP is one of the greatest straight edge EPs of the 1980s. Consisting of members of legendary hardcore bands such as Youth of Today, Gorilla Biscuits, and Judge, the band was incredibly short lived, and only played around 5 shows ever.

The album and band itself has a bit of interesting history behind them. Originally one of the members was just trying to release a compilation of early, unreleased hardcore songs but couldn’t get the rights to release the compilation, so Project X was born to release these songs (and Straight Edge Revenge was the result).

Ok, enough history, on to the actual music. If you dig the old school youth crew bands, you’ll love this, pretty much guaranteed. Some of the lyrics are over the top (and I’m technically straight edge), which makes me believe that they were actually poking fun at themselves and the whole straight edge movement. Just listen to the title track “Straight Edge Revenge” and try to tell me that it’s not a joke.

Song Shutdown deals with Youth of Today being banned from CBGB’s for encouraging stage dives, and Cross Me is your obligatory under 10 second fuck you song.

Definitely worth a listen if you dig classic hardcore.

THIS TIME YOU PUSHED ME TOO FAR!
Scenester 101: How to Be Hardcore in 10 Easy Steps!
Gorilla Biscuits
Ten Yard Fight

The Ataris – Look Forward To Failure (For fans of Blink-182, Saves The Day, Lagwagon)

Zero Down – With A Lifetime To Pay