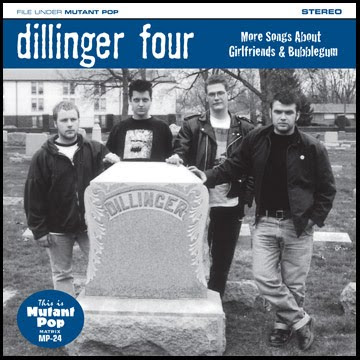 There’s certainly something about Dillinger Four that seems to be universal. Kind of like The Bouncing Souls, I’ve never come across anyone who didn’t love these Minneapolis punks (and if not love, at the very least dig them).

Most people are familiar with all of their four studio albums (four albums since 1998? C’mon dudes…) but many are unfamiliar with their EPs that they released way before they ever released their debut LP “Midwestern Songs Of The Americas”.

D4’s 1997 “More Songs About Girlfriends and Bubblegum” is a solid, four song EP that is classic Dillinger Four. While not as polished as any of their studio albums, musically the album is full of the infectious hooks and choruses that D4 is famous for.

Definitely take a listen if you’re a Dillinger Four fan. The EP itself is out of print, so if you can find a copy on ebay or something, definitely grab it, it’s worth it.

MP3:
Dillinger Four – Thanks For Nothing


Buy:
Out of print dudes.

Dillinger Four – Situationist Comedy (For fans of Off With Their Heads, Lawrence Arms, None More Black)