Hostage Calm – Self Titled (For fans of Pavement, Smiths, Beatles) 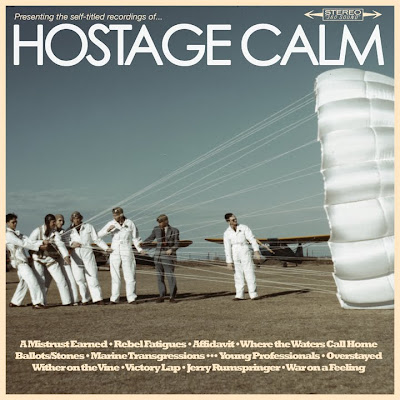 When I first read about Hostage Calm being compared to The Smiths or Pavement, I almost shrugged them off as “typical hipster bullshit” that I don’t like, with the added weight that they used to play hardcore. Usually would just ignore… but I decided to give their newest Self Titled album a listen, and let me tell you, it’s a lot tighter than I would expect.

Originally, with their first release “Lens”, the band played more melodic hardcore (and to be honest, I personally like the first album a lot better), but their Self Titled takes a much different turn. Focusing more on experimenting, the band incorporates latin beats, keyboards, slows the music down, and almost completely abandons their old hardcore roots. Obviously, this may piss off older fans, but take the album for what it is.

The band remains political and poignant, with songs such as Ballots/Stones, War On A Feeling, and Rebel Fatigue, while the music remains melodic (albeit poppy now).

While I’m disappointed that the band abandoned their roots, Hostage Calm’s Self Titled is worth taking a listen if you need some slower, easy listening music to put on in the background. Not my favorite album in the world, but I feel like this one might be a grower.

More:
Over Stars and Gutters
Smoke or Fire – This Sinking Ship
Friends of Friends

2007: Another Annoying Year in Mainstream Music