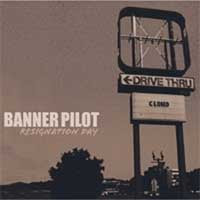 The title of Banner Pilot’s latest Fat Wreck re-issue “Resignation Day” is something I wish I can declare. But alas, while I can’t afford to quit my job, at least I’ll have something sweet to jam out to while I work.

First off, I usually feel pretty negatively towards remastered/re-issues. Sure, let me spend my hard earned money on songs that I already own. However, for Banner Pilot’s “Resignation Day”, I actually never listened to the original, and everything I’ve read from fans state that there is a HUGE, HUGE difference between the two versions. The guitars are full, the vocals better mixed, and the songs actually have a presence as opposed to feeling flat and recorded out of someone’s butt hole.

So for old fans, you could probably skip down to the track and see the difference for yourself and just know that the reissue includes two bonus tracks.

For people unfamiliar with Banner Pilot, “Resignation Day” is pretty much Midwestern punk rock with a bit more melodies added in. Think Dillinger Four meets Hotwater Music and Lawrence Arms. The songs have enough punk rock grit and catchy harmonies to keep me coming back, and if it wasn’t for the fact that the original was released in 2008, this would definitely be on my top 10 albums of the year.