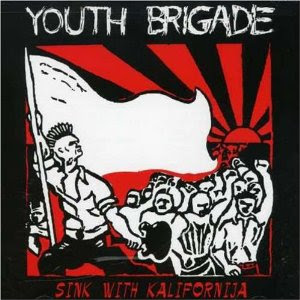 I’ve heard Youth Brigade declared as the most important punk band from Southern California that you’ve never heard of, and that is certainly the truth. Youth Brigade was founded by three brothers and became one of the most influential punk bands of the 1980s with their blend of hardcore and melody.

While they focused more on the melody aspect in later releases such as “To Sell The Truth”, their compilation Sink With Kalifornija shows their earlier, faster songs. Consisting of their first release Sound and Fury, What Price Is Happiness 7-inch, and a few live tracks, it took a while for the album to grow on me, but once it did, I couldn’t stop listening.

Some of the songs have a more hardcore, youth crew type bite to it such as Fight To Unite while others are more standard punk anthems (such as Men in Blue… well minus the joke rap at the end).

If you like any punk rock band formed after 1990, they probably were influenced in one way or another by Youth Brigade, so you might as well check out some punk rock roots.

More:
Youth Brigade – To Sell The Truth
Nofx – Coaster
NOFX – So Long And Thanks For All The Shoes