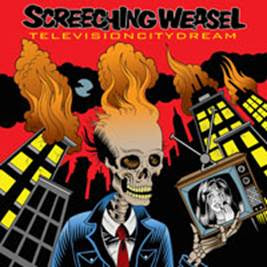 Fat Wreck has been doing a pretty damn stellar job with the reissues as of late. Normally, I find reissues pointless, but the label has been blowing me away with reissues from Banner Pilot and now Screeching Weasel. Taking the Chicago’s (true) pop-punk legends 1998 release “Television City Dream” and including 5 new songs, new artwork, and remastered, it’s pretty damn solid.

Now Television City Dream gets a lot of shit, because it’s a bit different than their earlier (Boogadaboogadaboogada) stuff since new members were added, but it’s still a damn solid album.
Songs like “Punk Rock Explained” and “Speed of Mutation” have the catchy songs we’ve come to love from Screeching Weasel, while songs like “I Don’t Give A Fuck” and a bunch of other songs that end under the one minute mark show their more aggressive side.

Definitely a solid listen if you skipped out on this album in the past.

More:
The Queers – Beyond The Valley
The Soviettes – LP
The Lillingtons – Too Late Show
Teenage Bottlerocket – Another Way

The Replacements- Putting On The Ritz (Live- 1987)

Less Than Jake Release New Song (And It’s Actually A Return To Form!)