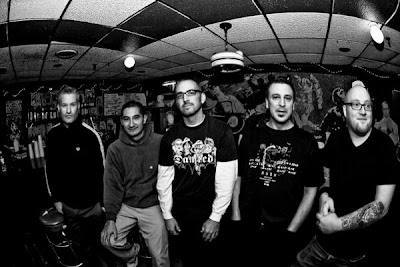 Last night, I had the perfect plan. I was going to head out to the Barbary to catch New Jersey hardcore legends Vision, and then trek the few blocks over to The Fire to see DIY or die duders Bomb The Music Industry… Unfortunately the BTMI show sold out, but at least I got to see Vision.

I got to the show in time to catch DC hardcore act Damnation A.D. There were a few dedicated fans up front doing the whole tough guy ninja shit in the pit during their act, and the band put on an ok set, but it’s a little too metal and has that “every song is pretty much one giant breakdown” for my taste.

Still, they got their fans pumped, so I guess that’s all that matters.

I’ve been listening to Vision for quite some time now, and to me they are one of the more original hardcore bands, mixing all types of influences into their songs. While not overly active these days (their last new release came out in 2003) and only playing a small handful of shows a year, I was pretty damn stoked to see them in a small, intimate setting.

The seasoned band blasted into In The Blink Of An Eye, and had myself and only a few others (including Joe Hardcore) up front piling on and shouting every word. Whatever, rest of the crowd’s loss. They played a tight set, and played the majority of songs off of their older albums. At one point they asked us what we wanted to hear, and they honored my request of playing “Pick of The Litter”. Thanks guys.

Setlist:
In The Blink Of An Eye
The Kids Still Have A Lot To Say
Two Wishes
Wipe The Slate
Again And Again
Pick Of The Litter
Absence Of Hope
The Life
Once
Close Minded
One And The Same
Suspect Device (Stiff Little Fingers cover)
Falling Apart

I would have stuck around to check out 108, but I wanted to try and get into that BTMI show… Oh well.