Steve Vs. The Volcano – First Round (For fans of Bones Brigade, Cut The Shit, Trash Talk) 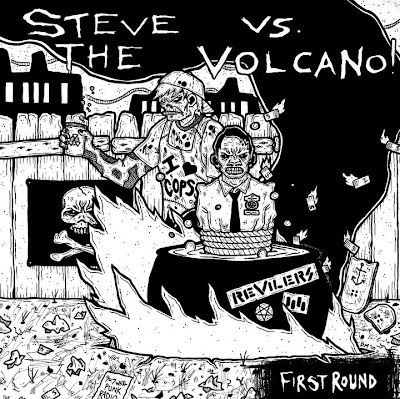 Anyone who’s been reading Housewives as of late knows that I am a complete sucker for thrashy hardcore punk. The latest band that has snuck into my regular rotation is “Steve Versus The Volcano” from Massachusetts.

To put it shortly and delicately as possible, these guys can fucking shred. Their debut album First Round is a 14 song blitz that ends in just a mere 17 minutes. Their music takes cues from Boston locals such as Bones Brigade and Cut The Shit.

Lyrically, the band doesn’t dig to deep and keep it relatively light hearted, such as in the song 211: “I can’t afford your fancy fucking beer/if it wasn’t for Steel Reserve, I wouldn’t be fucking here”. Also the album flows really damn well, with most of the songs leading into the next seamlessly. Perfect if you’re looking for a rowdy good time, definitely check this shit out.

Buy:
Steve Vs. The Volcano Myspace

What Song Did Less Than Jake Have In Their Head?