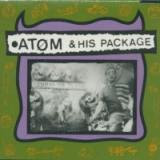 I can tell you right now, you’re either going to love Atom and His Package’s “The First CD” album, or you are going to completely despise it. There seems to be very little in between when it comes to this Philadelphia one man synth rocker.

Atom and His Package released “The First CD” back in 1997 and compared to his later releases, it contains the most light-hearted and silly songs. Mixing Atom’s off key singing, odd sense of humor, and ridiculously catchy sequence melodies, these songs are not exactly for those who take themselves to seriously (*cough* Pitchfork *cough*).

Atom even takes on some covers on the Self Titled album, making an electronic version of The Misfits “Where Eagles Dares” and probably the least ghetto version of Geto Boys “Mind’s Playing Tricks On Me”.

Fans of Matt and Kim, Totally Michael, or any of the other newer electronic rockers could probably take refuge in Atom and his catchy silliness. I fucking love this album, and it’s tough for me to listen to without putting a giant smile on my face.

MP3:
Atom And His Package – Avenger

Buy:
Atom and His Package

The Suicide Machines – War Profiteering Is Killing Us All