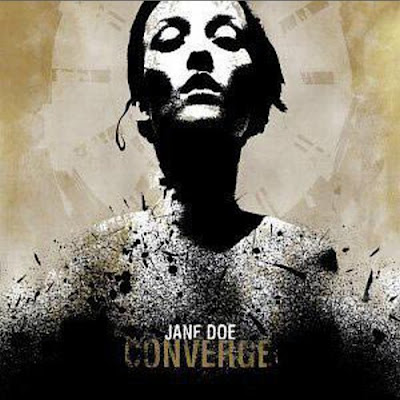 When I first heard Converge’s touted masterpiece “Jane Doe” nearly 9 years ago, I didn’t really appreciate it much. Sure, I dug a few songs off it (particularly “Homewrecker”), but the lyrics and the metal influences were lost on me. Recently I’ve given it another spin… and holy fuck.

There are few bands that can blend thrashy, progressive metal with the straight up aggressiveness and anger of hardcore as well as Converge does on this album. Jane Doe is a term used to describe an anonymous girl, and their concept is one that anyone who has ever had a long-term relationship fall apart can relate to: a girl that once had meaning in your life become nothing.

The music is fluid and sporadic at the same time, capturing the emotional turmoil created by a relationship dissolving. Did I mention it was heavy as fuck without any of the bullshit emo influences usually that tag along with the subject matter? Jacob Banner (vocalist) is quoted as saying “The album’s lyrical themes were born out of a dissolving relationship and the emotional fallout from that experience” and damn do they nail it.

Songs such as Concubine and Fault And Fracture are more grindcore in influences, while Homewrecker and fucking stellar track The Broken Vow take more pages from their book of hardcore.

I highly recommend this album if you need something heavy as shit or if you were considering shelling out a few hundred bucks for therapy. But I have to warn you, it’s not for the faint of heart.

Friends of Friends – Deep Search (For fans of Hot Water Music, Against Me!, Avail)