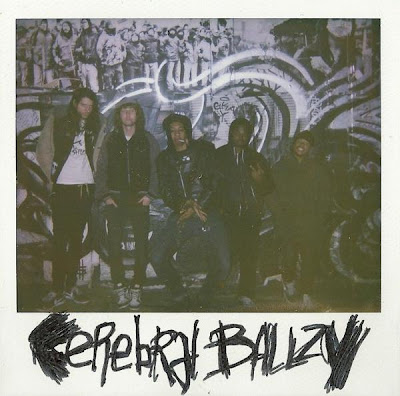 Last night, I headed out to South Philly’s finest punk dive bar, JR’s to catch my buddy’s band Old Stuff and also thrash skate punk dudes Cerebral Ballzy. There was a decent amount of people in the tiny bar, and things got nice and rowdy (like a punk show should, god damn it.)

First up was Philly’s Dopestroke. I’ve seen the vocalist’s other band before The Teenage Whore Moans, and wasn’t sure if Dopestroke was going to be playing the same surf-rock style as his former band. Nope, Dopestroke is completely different. Their music sounded more street punk in style, and they put on a catchy set.

Let me say right off the bat I was really impressed by Old Stuff. These Philly dudes were playing their 3rd show ever, and they had a lot of energy. Playing a nice mix of surf punk and Ramones influenced punk rock (they even threw in a cover of “Today Your Love, Tomorrow The World”). Frontman Ryan was constantly in the crowd dancing, go see them if you get a chance.

First off, the lead singer of the Philly band had a broken foot, but still played the show sitting on a stool (which his bandmates protected him by surrounding him) so that’s pretty hardcore. Second off, these guys were awesome, ranging all over the punk spectrum as far as style goes. One minute they’re playing surf rock, and the next they’re playing some Bones Brigade influenced thrash. Definitely worth checking out.

These Brooklyn skate thrashers traveled from Boston down to Philly on an off night with their tour with OFF and Trash Talk (more importantly, why the fuck did you skip Philly OFF!). They seemed pretty happy (or drunk) to be playing in the intimate bar, and the singer seemed pretty damn drunk.

They played a few newer songs I wasn’t familiar with, but also played some of my favorites such as Insufficient Fare, Don’t Tell Me What To Do, Skate All Day, Puke Song, and Anthem. The singer was constantly in the crowd, on the bar, and pissing off the bartenders by jumping behind the bar as well. I know I definitely lost my shit throughout their set.

Refusing to stop when the bartenders told them one more song and shut off the PA, they played through with one more song before they finally left. These guys are a bunch of assholes, but I love them anyway (and to be honest, I think a lot of it is part of their act… if you talk to them afterwards they’re pretty nice dudes, and don’t seem to be anywhere as drunk as they appear when they’re playing).

Glad they took the time to come down to Philly on their off night.