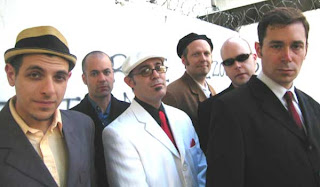 Last night, I had a tough decision to make: I could go see Dan Yemin, Andy Nelson, Atom, and a few others do Black Flag covers as TV Casualty… or I could go see the sweet, sweet ska beats of The Slackers. I decided it’s been a little bit of a while since I’ve seen The Slackers play, so I headed out to West Chester’s Note to catch the NYC ska band.

The show was 18+, and there were a decent amount of people there. I’m all for all ages shows and usually hate when shows have some bullshit age limit (in the words of Kid Dynamite: “It’s All Ages”), but it was actually really encouraging to see such a high turnout of people over 18 and 21 to a ska show.

I’ve never heard of these guys before, and I’m not going to lie, I was extremely skeptical before the show about even seeing them. Listening to ska for nearly 15 years now, I find there’s not many new ska bands I dig, as the majority of them are usually shitty Reel Big Fish ripoffs bands (and on account I don’t like Reel Big Fish…). The Snails completely surprised my cynical ass.

The second these Lancaster PA dudes took the stage, I knew they weren’t your typical ska band. They played straight rocksteady ska, similar to the Slackers and Westbound Train. The Snails had the place skanking, and I would definitely go see them again.

I miss seeing these guys at the First Unitarian Church, but The Note’s better than the TLA, so I was pretty stoked. They took the stage, and the place instantly erupted into a skanking, dancing, moshing(wait what?) mess. The band played a nice long set after taking a while to set up (mostly because Vic got stuck in traffic), playing for a total of about an hour and half.

They played songs spanning off of all their releases, with some of my favorites being “Everyday Is Sunday” and “Sarah”. The crowd was digging them, and the band played a really tight set as usual . The Slackers are one of the most consistent ska bands around, and if they come around you’re area, do yourself a favor.