Lighten Up record release show? No way I was missing and not losing my shit at this one, even if I was getting an MRI earlier in the day. I headed out to the DBAJ house and caught the 4 bands playing for the night.

First up were Philly’s own No Lessons Learned. Playing hardcore that sort of reminded me of Sick Of It All, these guys put on a relatively quick but hard hitting set that got a few people in the crowd moving. They’ve got their Demo up for download on their site, so if you’re into that style of hardcore, go check it out here.

Next up were St. Louis Sweet Tooth, who after a brief introduction, the singer immediately kicked me in the knee (that bastard) and charged the crowd. Uhh… ok. They played a spastic set without any breaks, their music reminding me a bit of Ceremony’s early stuff. The microphone was cutting out a lot, but that didn’t stop the vocalist from just throwing the mic down and screaming along still. 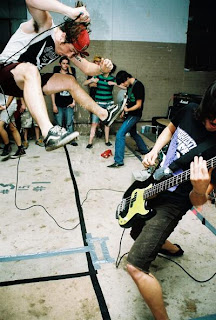 Holy fuck. I’ve never heard these guys before, but they made a fan out of me with their set. Originally from Texas, these guys are now spread out all over the country, and this was their first tour since October (they didn’t even bring their own equipment, as they claim they’re touring in a Ford Taurus).

These guys played crossover thrash that just made me want to skate. Similar to D.R.I and Municipal Waste, they had a bunch of kids in the pit moving around with their boards. ANS played a pretty long set, and usually with a band I don’t know I get bored, but I was hoping they’d keep playing. It’s rare to find thrash bands this solid. 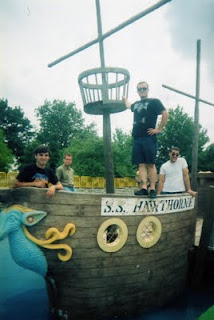 I’ve seen Lighten Up a bunch of times over the past 2 years, but I have to say, this was easily the best and most fun Lighten Up show I’ve seen. Celebrating their release of their newest EP “Where Fun Goes To Die”, Lighten Up played the longest set I’ve ever seen them do (fuck yeah), and played shit spanning off of all of their releases.

We went into a frenzy as well with dancing and piling on, and shouting along every word. They opened up with their self titled fan favorite “Lighten Up” and were relentless the rest of the set. When the band finished, we demanded them to play “Lighten Up” one more time, which they complied. A damn good time, they should probably keep their sets this length at all of their shows.

MP3:
Lighten Up – Absolutely Not

Mischief Brew (Folk Punk for fans of Against Me!, Defiance Ohio, Flogging Molly)