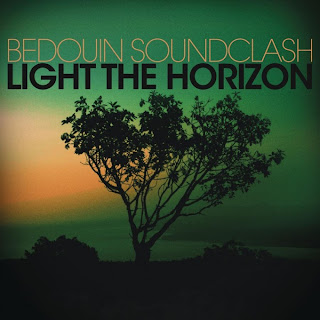 I’ve been a pretty big fan of Bedouin Soundclash for a while now, ever since they released “Sounding A Mosaic” back in 2004. After their prior and personal favorite release of “Street Gospels“, I was pretty excited to check out their latest release “Light The Horizon”.

In all honesty, I’ve actually been sitting on the review of “Light The Horizon” for months now, hoping I’d warm up to it more. It’s a solid listen, but it’s a bit of a departure from their earlier stuff, and in my opinion doesn’t really quite compare to Street Gospels or Sounding A Mosaic. Still, it’s a decent listen and definitely worth your time.

Except for opening “On A Mountaintop”, LTH abandons the perky, experimental reggae/ska for a more roots, ambiance, and almost folky sound. It makes for a solid, easy listening album, but besides a song here and there, nothing that really sticks with me.

Still, a good listen to put on every now and then, it just doesn’t get the same amount of rotations as Street Gospels.