Jumping Jesus on a pogo stick, I’ve been busy! Car breakdowns, my birthday… it’s been tough to post as of late. But I still <3 you all, and I also love the Holy Mess. Hence why I might be catching them tomorrow, and why I saw them last Tuesday at Philly's Fire. Ah, Horse Hockey
I’ve never heard of these guys before, but I definitely was digging their set. They played that Philly style pop-punk that the Menzingers have made famous here. I think they’ve got their EP up for download on their bandcamp, check it. (I checked out some songs and their live show was much more energetic, so see them live). I skipped Daytrader to go get some foodage. 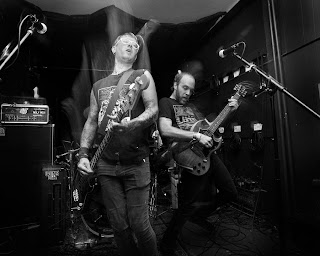 Taken by one of the best concert photographers I’ve ever seen: Blake

Motherfuck The Holy Mess! Philly’s premier party band, these guys played an enjoyable set of their brand of D4 had sex with the Menzingers line of punk rock. The band seemed pretty sober (wait, what?) and yet, their set was plagued with technical issues. Figures.

Regardless, they played songs spanning off all 3 of their releases (although ignoring my Stroudsburg request… saying they’ll play it on Sunday, we’ll see). 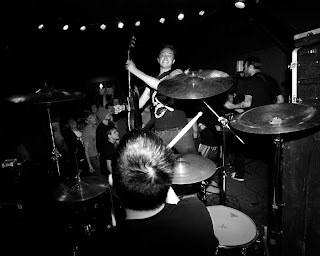 Taken by one of the best concert photographers I’ve ever seen: Blake

I really don’t know much of the Flatliners catalogue except the few spins I’ve given one of their albums, but I thought they were a ska band??? Apparently I was wrong. Sure, they had some upstrokes, but a lot of their songs were that melodic punk sound.

They played a really tight and enjoyable set that had people in the crowd opening a pit that didn’t relent for the rest of the night. The only song I know that the band played was called Scumpunch, and at some points they definitely had a Suicide Machines vibe to them.