Less Than Jake – Greetings From… (For fans of Against All Authority, Reel Big Fish, Big D And The Kids Table) 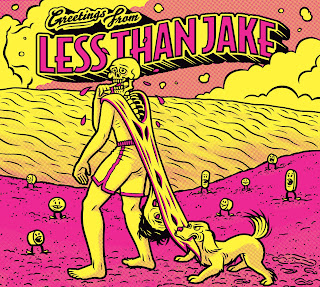 Less Than Jake reminds me of the story of the prodigal son. The band had a big and loyal ska-punk fanbase, went out and squandered it to be able to get radio airplay (eliminating the horns for the most part), realizing that they weren’t enjoying doing that even though they were making more money and returned to their fanbase who welcomed them with open arms back in 2008 with the release of GNVFLA.

Seemingly out of the blue, Less Than Jake recently released “Greetings From…” earlier this week, a 5 song EP that ends in about 15 minutes. The songs seem to span all of their catalog: from opener “Can’t Yell Any Louder” is reminiscent of Hello Rockview era with it’s aggressive ska punk, to the ska grooving “Goodbye Mr. Personality”.

If you were a fan of Less Than Jake a while back, give “Greetings From…” a listen, it may just rekindle your love.