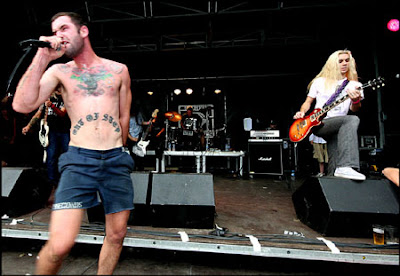 On Sunday, I headed out to Philly’s Barbary to catch one of my favorite hardcore bands around: Ceremony. Recently they signed to Matador, so I’m not sure how that’s going to impact their newest album, but the Barbary was crowded on the beautiful summer day.

First up was Philly’s own Pink Coffins. I’ve heard the name a lot, but have never seen or listened to the band before. That’s going to have to change after seeing them live. Pink Coffins tore it up, with their furious brand of hardcore. Definitely check them out live if you get a chance, reminded me a bit of Bane meets Paint it Black.

I skipped Gypsy’s set to grab some food, and made it back in time for Australia’s Kromosom. HOLY FUCKING SHIT, these guys know how to party. With the opening note, the lead singer stage dove into the crowd, opened a pit, and pretty much kept diving into the crowd the rest of the night. One of the most energetic frontmen I’ve ever seen live, that’s for sure.

They reminded me of Discharge mixed with some more street punk influences. I’m not sure how their music would translate on record, but I intend to find out soon.

While taking forever to set up, Ceremony did not disappoint. This California band is one of the most prominent in hardcore right now, and with their latest signing to Matador, I feel like they’re only going to get bigger and even weirder. The band blasted straight into “Into The Wayside/Sick”, and we instantly started the pile-ons and dancing. Ross was his manic self on stage, and while we didn’t see him rolling around the pit this time around, he definitely kept things interesting. Their newest member, Philly’s own Andy from Paint it Black was also incredibly active, jumping into the crowd a few times.

The majority of the set list contained songs from their latest Rohnert Park, and then some scattered off of their previous releases (with a solid chunk off my favorite “Violence Violence + Ruined”). Ceremony didn’t play an encore, but they did play another show later that night at Philly’s Punx Picnic (which I unfortunately did not get to see, anyone who went… how was it???)

Setlist:
Into The Wayside/Sick
Pressure’s On
My War
Open Head
The Difference Between Looking And Seeing
Violence
Mothers And Fathers
Moving Principle
Living Hell
Terminal Addiction
Throwing Bricks
I Want To Bring This To An End
It Rained In My Head
MCDF
He-God-Has Favored Our Undertakings
Kersed
Doldrums

The Hope Conspiracy – Cold Blue (For fans of Give Up The Ghost, Ten Yard Fight, Converge)

The Evil Powers Of A Mustache