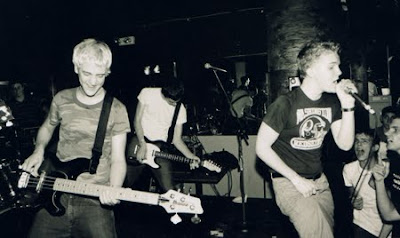 Confession: I’ve been waiting for nearly 11 years to go see Saves The Day. Being from New Jersey, and loving Through Being Cool when it first came out (aaaand throughout the years), I’m sort of embarrassed I waited this long. I was always worried they wouldn’t play anything off their first two albums (the only two I really know), and hence waited longer. I finally decided it was way too long, so I headed out to Philly’s Trocadero.

I almost wasn’t allowed into the venue due to some ticketing problems, but that got straightened out just in time for Saves The Day, and thank god, as they opened with All-Star Me. You could easily tell who the old heads were in the crowd, as we immediately began a pit in the back two stepping, and then the young ones were going nuts for everything after “In Reverie”.

Unfortunately, I didn’t know a lot of the setlist, but Saves The Day played much more off of their old stuff than I imagined (even throwing a song off Can’t Slow Down in there). A solid set, STD (what an unfortunate acronym) played songs to appease both old and newer fans. The only two downsides to their set was no “Sell My Old Clothes, I’m Off To Heaven” and a fucking fight broke out a Saves The Day show (mostly because some people started hardcore dancing… two steps people not spin kicks!

Mp3:
Saves The Day – Banned From The Back Porch