Star Fucking Hipsters – From The Dumpster To The Grave (For fans of Leftover Crack, Choking Victim, Morning Glory) 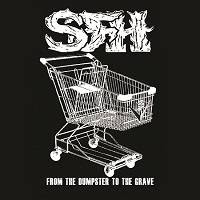 Scott Sturgeon and his self proclaimed crack rock steady bands (Star Fucking Hipsters, Choking Victim, Leftover Crack) have always stirred mixed feelings among punk rock fans. Earlier this month, Star Fucking Hipsters released their 3rd album entitled “From The Dumpster To The Grave”, and love them or hate them… they sure can write a catchy fucking tune.

In past releases the band mixed elements of punk, metal, ska, and pop to create a infectiously catchy ass song, and they have proven to do the same on their latest. The band places heavy emphasis on ska chord progressions and rhythms this time around, as heard on the title track and Death Is Never Out Of Fashion. In addition to the SFH sound we’re used to, they switch it up a bit with a hip hop track “9/11 Until Infinity” featuring Boots Riley of The Coup, and a cover of of Ana Ng by They Might Be Giants.

The dual vocals still exist, except with some lineup changes, it’s tough to tell exactly who is doing the female vocals at any given spot (Nico De Gallo, Yula Beeri, and Kill-C). I’ll admit that on first listen, I wasn’t a huge fan, but eventually warmed up to it and now listen to it pretty regularly. Cheeky titles and lyrics aside, Star Fucking Hipsters made one hell of a followup album, and I would recommend it if you’re looking for something catchy but still with plenty of edge.