Hallowfuckingween. After making my friend listen to Misfits all day (pretty sure that’s a law), I headed out to Philly’s new Union Transfer for sold out Hallowmas featuring World Inferno Friendship Society, Melt Banana, and Mischief Brew. The majority of people there were dressed up in full blown costume and people were in high spirits, handing out candy, throwing glitter, etc. 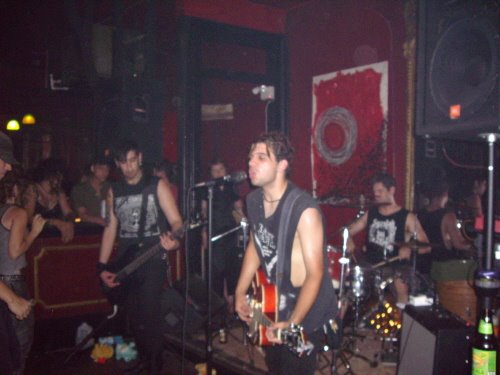 Unfortunately, I got there a little bit late and didn’t catch the beginning of their set (fuck, especially since they opened with “Thanks Bastards” apparently), but the crowd was singing along to all of the words from these Philly locals. Playing their blend of folk and punk, I can’t remember much of their set, but people lost their shit once they played “Roll Me Through The Gates Of Hell”.

Although really, those were some of the worst stage dives I’ve ever seen… 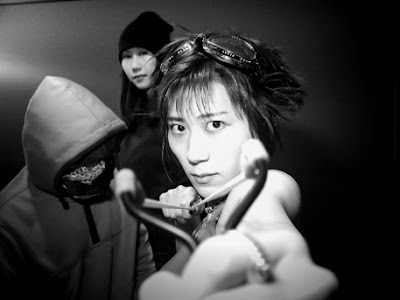 Holy shit, I love Melt Banana. Suffering from MB withdrawal (it’s been a full 2 years since they’ve last been to Philly!) I completely lost my shit the second they took the stage. Lead singer Yako took the stage in a cat costume with an an ax, and these Japanese spastic rockers completely stole the show. Having the most aggressive pit of the night, you could tell people who were fans and who never heard of them. People who never heard of Melt Banana just had a look on their face somewhere between “holy shit this is awesome” and “what the fuck is happening right now?”

They played a decent amount of songs off of their last two releases Bambi’s Dillema and Cell Scrape, and even through in a cover of What A Wonderful World by Louis Armstrong. At one point, they played 8 of their really short songs and finished this in about 3 minutes.

These noise rockers need to come to the States more often or at least come out with a new album soon… I need more Melt Banana in my life.

Highlights:
Spider Snipe
Heiwaboke Crisis
Chain Shot To Have Some Fun
A Dreamer Who Is Too Weak To Face Up To
Lost Parts Stinging Me So Cold
Shield For Your Eyes, A Beast In The Palm Of Your Hands
What A Wonderful World (cover) 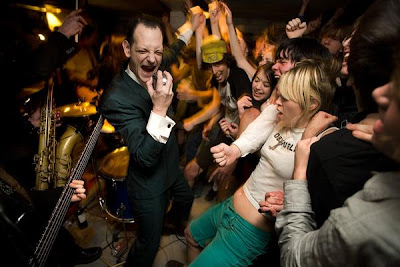 Usually after Melt Banana I have complete musical A.D.D and my attention towards other music is dead, but nothing these charming Brooklyn punk (waltzers) couldn’t fix. The entire night was filled with color, costumes, candy, giant pumpkins, and general debauchery all around. While there wasn’t much room to have much of a pit, there was plenty of dancing and waltzing going on.

The band reveled in their big day, playing a longer set than usual (plenty of the songs early stuff) and all around was a good time. Jack was his charismatic self on stage, and his banter was the usual mix of charming, entertaining, and funny at the same time. Playing stuff off of all of their releases (and keeping the new songs to a minimum… although I actually really like the new album) they did play one of my personal favorites “Please My Favorite, Don’t Be Sad”.

I was a bit surprised they held their Halloween show in Philly, but I am not one to complain. Although I was kind of taken aback by how tame the crowd seemed… maybe it was because it was Monday, maybe everyone was brushing off their Halloween weekend hangovers, but I though Hallomas was the wildest Inferno show of the year. Still, definitely a fucking good time, hopefully they come through these parts again soon (and bring Melt Banana).

Setlist (From what I Remember and Not In Order)

A Night In The Woods
Tattoos Fade
M Is For Morphine
And Embarked On A Life Of Poverty
Thumb Cinema
I Remember The Weimer
All Of California And Everyone Who Lives There Stinks
Jeffrey Lee
My Ancestral Homeland, New Jersey
Brother Of The Mayor Of Bridgewater
Velocity Of Love
Me V. The Angry Mob
Please My Favorite Don’t Be Sad
The Devil’s Ball
I Am Sick Of People Being Sick Of My Shit
Canonize Philip K Dick, OK?
Cats Are Not Lucky Creatures
Go With It Girl
Pumpkin Time

Kill Your Idols – This Is Just The Beginning (For fans of Negative Approach, Ignite, Casualties)