Wisdom In Chains – Die Young (For fand of Kill Your Idols, Sick Of It All, Blood For Blood) 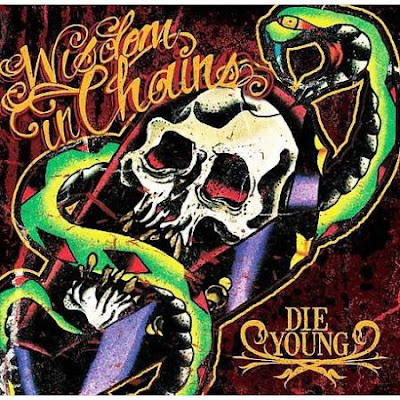 I’ll be the first to admit it, when I first heard Wisdom in Chains, I immediately brushed them off as another tough guy hardcore band. You know, the type where kids in Terror and Blood for Blood hoodies and mesh shorts go in the pit and practice their spin kicks and softball windmill throws on each other (I’d rather take some solid two stepping and pile-ons any day thank you very much…).

I decided to give their 2005 release “Die Young” (reissued in 2007) a listen and damn I was pleasantly surprised. The 17 song album isn’t the tough guy chug fest that I was expecting (don’t get me wrong, it’s still there), but instead blends plenty of elements of straight up punk rock and oi into the hardcore. Songs such as “Fade” and “Out Of Season” are more likely to inspire circle pits with their catchy punk rock hooks while “The Game Of War” and “One Of These Days” are more traditional hardcore anthems. “Fighting In The Streets” is probably one of the catchiest Oi anthems I’ve heard to date.

Mad Joe Black never really screams into the microphone and has more of a barking with melody style to his voice. Guitarist Tony adds his talented solos throughout the album adding an element making Wisdom In Chain’s sound their own.

Listening to “Die Young” was incredibly reminiscent of Kill Your Idols earlier stuff, when they mixed a lot of punk rock melodies in with their hardcore. Definitely give this one a chance.

MP3:
Wisdom In Chains – Fighting In The Streets