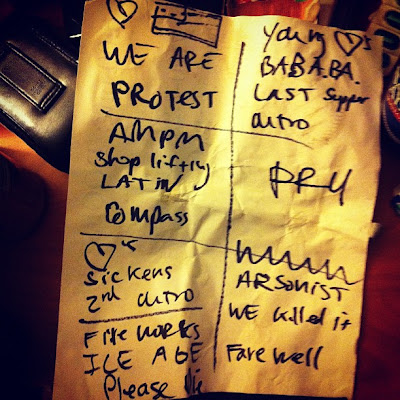 Holy shit. Ever since I first saw American Nightmare (aka Give Up The Ghost) back in 2003 with the Hope Conspiracy, they became one of my favorite hardcore bands, and I’ve been annoying my friends ever since saying that I wish they would play a fucking reunion show. So when I saw that they were playing Boston, you can damn well imagine that I made the trek up from Philly to see these hardcore legends.

The openers were a surprise, which led people to have all sorts of crazy expectations (some of the rumors floating around: Glassjaw, Have Heart, Blood for Blood, Converge) and it seemed like a lot of people were disappointed with the openers. Fuck that, I don’t care if Justin Beiber opened the show, American Nightmare was playing.

It didn’t seem like anyone knew who these PA dudes were. They played screechy noisy hardcore and were slightly reminiscent of Some Girls. The band seemed a bit of place on that huge stage, and I got the vibe from them that they were much more comfortable playing house shows (the singer jumped off the stage for a while and into the crowd).
COA:

Brockton Massachusetts hardcore, COA had a sizable pit going of people losing their shit. Not usually my style of hardcore per say, the singer came out wearing a bulletproof vest, and they actually played a pretty solid set. Chock full of mosh parts, check em out if you’re into old NY hardcore, they reminded me a bit of old Agnostic Front and Sick of it All.

All Pigs Must Die:

I’ve never heard of APMD before, but these dudes completely tore it up to say the least. Comprised of members from both Converge and The Hope Conspiracy, these guys really reminded me of Disfear. Heavy as shit, I definitely am going to need to check them out. 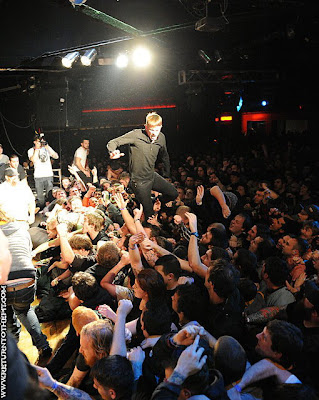 Fuck. I haven’t been this excited for a set in a long time, and up to the point they came on stage, my heart was completely racing. We immediately broke out into a giant pit, and the stage dives began immediately as the band opened up with “Love American”. I wasn’t sure how into it Wes was going to be, but with his stage dives and head walking in the crowd, the band was obviously into it (as was the crowd).

The whole place was a frenzy, and probably the wildest hardcore show I may have ever been to. American Nightmare also played one hell of a setlist as well. The only negative thing I have to say about the show was the dumb fucking pricks who decided to get into a fight on stage which almost killed the vibe (and had the crowd screaming “Asshole, Asshole”). Seriously, a lot of us traveled fucking far (talked to some kids who drove from South Carolina, Arizona, Florida) for this shit, and it wasn’t to watch dumb meat heads fight. Luckily, after that settled down, the show picked up right where it left off and the frenzy continued as if nothing ever happened.

Fuck yeah. And to all the people I’ve met who traveled far for this show, I hope you all got home safely.

Setlist (From what I remember, I don’t think all the ones in the pic were played):

-Love American
-(We Are)
-Protest Song #00
-AM/PM
-Shoplifting in A Ghost Town (I think)
-I Saved Latin
-Postmark My Compass
-Hearts
-I’ve Shared Your Lips and Now They Sicken Me
-Fuck What Fireworks Stand For
-The Ice Age Is Coming
-Please Die!
-Young Hearts Be Free Tonight
-Calculation Nation
-There’s A Black Hole In The Shadow Of The Pru
-Farewell

More:
American Nightmare – Year One
Scenester 101: How To Be An Old School Hardcore Kid In 10 Easy Steps!

Buy:
Screaming Gets You Nothing