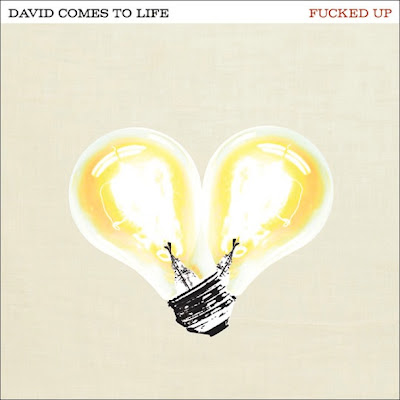 If there is one band that always manages to surprise the hell out of me, it’s Fucked Up. I remember listening to their demo and Epic in Minutes back when it came out and thinking they were pretty solid hardcore band, but not the messiahs of hardcore many were touting them to be. Now ten years later they release “David Comes To Life” and not only are the ‘too cool for school’ writers at Pitchfork collectively jizzing their pants over it, it’s listed as #83 of Billboard’s Top 200 of 2011… Kudos Fucked Up… kudos.

To be honest, I haven’t listened to anything by Fucked Up since their compilation retrospective “Epic In Minutes”, and it is a LOT different than the blistering hardcore I was used to from these Toronto punks. For starters, David Comes To Life is for lack of a better term: a rock opera. On the surface, the entire 18 song album is about light bulb factory worker David, his new love Veronica, them conspiring to build a bomb together, her dying in the process, his guilt, battling the narrator for control, and redemption. Of course the whole thing is symbolic as stated by singer Damian “we could hide behind characters and pretend that we’re talking about David and Veronica when really we’re talking about my breaking with my girlfriend or something”. Some of the lyrics are incredibly witty “we need a Peter / we get a Paul / at least Judas had some balls.”

Ok, so how about the actual music? For starters, there’s a lot more pop elements involved. Fucked Up has long stopped touting the hardcore flag, and it’s a lot more rock with hardcore influences than straight up hardcore with Damian’s rough punk vocals being the biggest mainstay (I just used hardcore three times in a sentence, new record.) Still, the music is incredibly catchy although with 18 songs at 77 minutes, the album definitely gets pretty repetitious at times and is not really made to be listened to in one sitting.

Very different from the hardcore I’m used to, I give Fucked Up credit for going out on a limb and trying something different. It’s refreshing to see a different topic for an album than the often overplayed ones found in hardcore (we’re looking at you every straight edge band out there). One of the very few hardcore bands hipsters are allowed to like (along with Trash Talk, and soon to be Ceremony), definitely give Fucked Up a chance, some catchy songs in here.

MP3:
Fucked Up – Queen Of Hearts