Ladies and gentlemen, boys and girls, non-gender identifying people:  the moment you’ve all been waiting for since the moment you were born.  I present to you the Battle Of The Midwestern Housewives top 10 releases of 2012!

Obviously I didn’t get a chance to check everything out that I wanted to (Classics of Love, Hot Water Music’s new album, etc) and I ALWAYS wind up leaving something off the list that should have made it (like Punch’s Nothing Lasts EP would definitely be my #1 of 2011… ah well). In addition, I was saddened that some of my favorite bands didn’t make the cut with their latest (Bouncing Souls, Ceremony), and as good as that new Kesha song is, I spared you all.

10. Morning Glory – Poets Were My Heroes

If we’re going to be totally honest, I wasn’t expecting too much from the latest Morning Glory release.  Sure, I like Ezra’s (Leftover Crack, Choking Victim) project enough, but I thought everything with crack rock steady has been said and done already.  Boy was I surprised to hear strings, pianos, and all sorts of instrumentation on this album.  Clean production, poppy melodies, and punk rock snarl make Poets Were My Heroes one incredibly surprising listen.

Morning Glory – Shelter From The Spoon

These Richmond crossover thrash kings have exploded over recent years, and I am happy to say that The Fatal Feast was a return to their aggressive, party fest sound that seemed to be missing from their lackluster Massive Aggressive.  Music to break stuff to.

NOFX have been doing this punk thing for quite some time (30 years now) and they found the formula that works for them.  Some people say that they just release the same album over and over, but you know what?  I like that fucking album.  Sure, you won’t find anything too original here, but that’s what makes it so refreshing in a year that my favorite bands decided to try something new.

NOFX – She Didn’t Lose Her Baby

Keith Morris (Black Flag/Circle Jerks) is 57 years old with diabetes, and still rocks harder than a strong majority of bands who’s just a fraction of his age. With 16 songs in 15 minutes and aggressive punk rock without any of the frills, you’d think that this was actually recorded in the 80s.

OFF – I Got News For You

I don’t know much about the band except for the fact that this release completely kills it. Just like your mom, Best Practices takes a bunch of ingredients, throws it in a blender, and makes a much more delicious smoothie than anyone else who even tries.  Noisy, garage, melodic punk rock that you need to hear.

Even though I listen to member’s other bands (Graf Orlock, Dangers), I just discovered Ghostlimb this year, and holy shit am I glad I did.  Playing the most melodic hardcore, borderline grindcore imaginable, Ghostlimb turns up the aggression a notch on Confluence to make everything else you listen to just seem so passive.  If you dig Tragedy at all, check this one out.

It seems like pop-punk and hardcore have always been closely related, and nothing seems to prove this more than two pop-punk bands joining forces to release one fuck of a release.  Both bands were pretty active in 2012, but I have to admit, this is easily my favorite of any of their releases of the year.  Quick to the point hardcore.

3. Static Radio NJ – We Are All Beasts

Static Radio NJ is one of those very few bands that I’ve been listening to since the start, and have seen evolve, and actually LIKE their new sound.  Starting off as a straight up hardcore band, Static Radio evolved to playing more Lifetime-esque melodies.  Unfortunately the band called it quits this year, but that shouldn’t stop you from checking out their latest (and last). 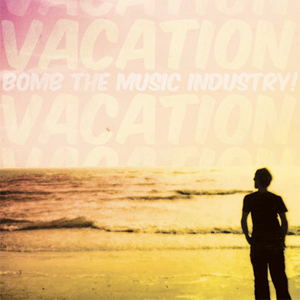 When I first listened to BTMI’s Vacation, I hated it.  It was a complete departure from the ska-punk I know and love from the Brooklynites, but after a friend encouraged me to give it another chance, I completely fell in love.  They slowed it down a bit, and bust out some of the most heartfelt songs we’ve ever heard from them.

Propagandhi can do no wrong (well, except for Potemkin City Limits… I didn’t like that album).  The once skate punk now thrash champions return with some of the most aggressive, hard hitting music they’ve ever released… and it’s good… real good.

Bomb the Music Industry! – To Leave or Die In Long Island (For fans of Arrogants Sons of Bitches, Big D and the Kids Table, Mustard Plug)