I’m A Fucked Up Dancer, But My Moods Are SWINGING! 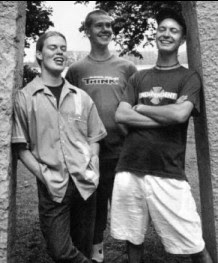 Greatest. Album. Title. Ever. Which is appropriate that the band I Against I would be really creative with their album name on account their band name is stolen from a Bad Brains song (a hella good song). Anyways, back in their heyday, I Against I hailed from Holland, and never really caught on over here in the States (I’ve read it’s because of their “Dutch” sound, but I have no clue what the fuck that even means. I didn’t know they were from Holland for years). Regardless, the one album they did release in America “Headcleaner”, is a really solid poppier punk album (and one of the first punk albums I’ve ever owned). Some really catchy songs by this band.

From I’m A Fucked Up Dancer But My Moods Are Swinging:
MP3: I Against I – Nothing Happened