Arrah and the Ferns- The Interview! 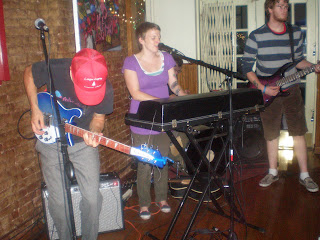 Since getting a copy of Arrah and the Ferns début album Evan is a Vegan I’ve listened to it either on my own or in my friend Andy’s car 7.5 million times.* Being a Housewives favorite they’re one of our most blogged bands (weirdly enough so is Journey). So I was really pumped to get a chance to talk to them before their show in Long Island City a couple weeks ago. Read on to learn what the band thinks about Third Eye Blind, singing with dead people, and of course breakfast cereal.

If you had to describe Arrah and the Ferns to someone who’d never heard you what would you say?
Carl– I would say indie-pop with a folk twist.
Arrah– Sounds like potatoes and unicorns and summers eves, yeah folk, pop, indie-rock, we’re hybrids of alot of things.

What would you say your major influences are?
Arrah– For me alot of female musicians like Mira or… it kinda depends on who I’m listening to at the moment. It’s always like, this song’s influenced by this band that I’m listening to at the moment. I dunno, but alot of poppy stuff and lately it’s been more rocking angsty stuff.
Carl– As far as for Arrah and the Ferns guitarists I really like the guitarist from Deerhoof, I guess that’s a big influence. I don’t play very much like his style. Then bands, Wolf Parade we’ll throw that in, we all really like Wolf Parade. I can’t really think of anything else off the top of my head.
Joey– Having just joined the band I haven’t really been in the writing process very much so I dunno. I really like Modest Mouse’s bass player, I’d like to play like that guy.
Dave– I guess a drummer I look up to and try to keep in mind is the drummer from Deerhoof, Greg.

Do any of you have any musical guilty pleasures?
Joey– I listen to Tool, Blink 182.
Carl– We all like to pop in the Third Eye Blind.
Arrah– As a joke.
Carl– That’s a guilty pleasure.
Arrah– Ok, I mean we don’t like it.
Joey– I think it’s good.
Arrah– Oh, well I don’t like it.
Carl– And then Taking Back Sunday.
Joey– Speak for yourself.
Carl– Joey doesn’t like Taking Back Sunday.
Arrah– I don’t have any guilty pleasures, I don’t really feel guilty for what I listen to.
Carl– I still listen to Coheed and Cambria when it comes up on my itunes. Yeah, I don’t really feel guilty but I guess that’s stuff that’s not cool.
Joey– I only listen to Brittany Spears.

So what would a dream collaboration be?
Joey– Neutral Milk Hotel for me.
Dave– I dunno, probably some jazz band.
Arrah– I would like to sing in a choir with all my favorite vocalists, so lots of different people. Particulatly Billie Holiday, Niko, people that are dead. I wanna have a women’s choir with lots of dead people.
Carl– Taking Back Sunday, I wanna do a split with them.
Arrah– I think on the whole though, Arrah and the Ferns would have alot of fun with Architecture in Helsinki. That would be alot of fun.

What’s the best and worst thing about Indiana?
Joey– Alright, the best thing is that because of its size there aren’t very many people there so in the music scene it’s really easy to get your name around, people hear about you alot easier. The worst thing is… you’re living in Indiana. There’s not really much to do for fun there.
Arrah– The scenery’s pretty bad
Joey– Oh yeah, it’s completely flat. Everyone assumes we like racing alot when they hear we’re from Indiana.

Joey, has it been your lifelong ambition to become a Fern or how did you get into this gig?
Joey– I wanted to for a long time. Dave and Arrah and me have this side project band called Woodlands where I played guitar and they just asked if I wanted to play bass and I was like yeah sure I’ll do that. I dunno I just kinda fell into it I guess.

If you guys could play any presidential inauguration whose would it be?
Arrah– William McKinley!
Carl– Why William McKinley?
Arrah– Because he’s my uncle. No, everyone wants him, what about Garfield. We can’t agree.
Joey– See I would say Roosevelt but whatever.
Carl– I would just be happy for the free food, I’d imagine there’s alot of that involved in playing an inauguration.
Joey– Wait, what if we played at Bill Clinton’s and he played saxophone with us. That’d be sweet.

When can we expect a new album out from you guys?
Arrah– Hopefully by spring, early spring. I have most of the songs written for the next album and we have alot of new songs we’re playing but we still need to work on alot of stuff and we’re gonna take our time in the studio whatever we do. I’d like to start recording in the fall and get it done by Christmas time. It depends on how things pan out because Dave’s gonna be living a couple hours away from us but I’d really like to see it out by spring. But for sure next year by next summer.

*This is a rough estimate; the actual number might be higher.