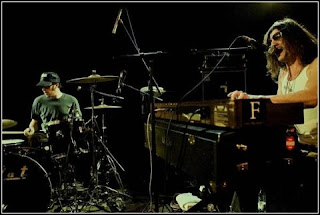 Some people say that veins are blue because they contain deoxygenated blood or they’re covered in some sort of blueish fat, but the Black Diamond Heavies know it’s because the blues is part of everyone: it doesn’t run in your blood, it is your blood. Professional medical smartypantses will unilaterally disagree with that assertion; luckily we don’t pay them for their musical opinions.

Sucking on that same blue vein has nourished vampires like the Black Keys, the Kills, and the White Stripes into two-person acts that are hotter than Dracula in an Arizona goth club with broken air conditioning, the tandem of organist and crooner John Wesley Myers and crazy-ass drummer Van Campbell spew fire- and brimstone-laced blues and blues rock that oozes soul. More specifically, it sounds like Tom Waits, Ray Charles, and John Lee Hooker taking hard swigs from a jug of moonshine in the middle of a Baptist church. So break out the whiskey and sunglasses, kids, and enjoy the show.

The HandMe Downs – I Think It’s About Time (For fans of Rancid, The Have Nots, Koffin Kats)

Aneurysm Rats – Dying To Live (For fans of Black Flag, Paint it Black, Lighten Up)