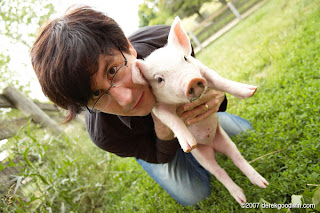 Hope you all had good holidays. One of my coworkers today claimed that he was getting too old to get excited about presents. Pfff! First off I think he’s lying, secondly I’d like to say that I am not so feel free to shower me with gifts. One of my favorites this year was from Mountain Goat, John Darnielle and Vanderslice, John Vanderslice.

Here’s the word from the Mountain Goats official site:

“For years, John Vanderslice and I have been talking about doing a collaborative album … we drummed up this story about organ harvesting colonies on the moon, and the guys who secretly work up there six months out of the year, toiling in the employ of an unidentified government agency. Our protagonists live lives of secluded, anonymous luxury during their off-seasons; theoretically, anyway (hardly any songs have been written for the project; God knows if it will ever be finished), one of them begins to tell his story in the following song.”

Also, it looks like the new Mountain Goats album Heretic Pride has leaked. The Runout Groove has a couple tracks up.