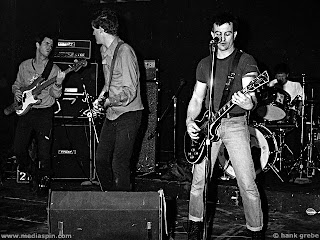 Fun trivia about Fear: They were on Saturday Night Live back in 1981 (much to the producers dismay) and had a bunch of fans from D.C show up (including Ian Mckaye, who you can see stage diving and skanking). Youtube it, and watch how fast the place became an all out frenzy (wait about 30 seconds in).

I’ve been listening to these guys for 2 days straight now. If you’re a fan of 80s punk in the veins of the Dead Kennedy’s, I’d highly recommend checking Fear out. Incredibly sarcastic (just check out “I Love Living In the City”), pissed off, and hilarious songs.