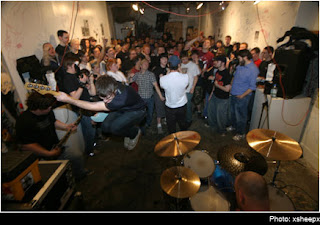 With their 3rd release “New Lexicon”, Paint It Black definitely dove into some new territory, and it works. Anyone who is familiar with this Philadelphia outfit featuring Dan Yemin of Kid Dynamite, Lifetime, and Armalite will tell you that their music is short, fast, loud, and raw (that’s what she said! Err.. Sorry).

The songs on New Lexicon are longer (they actually broke the 2 minute mark for the first time), with some songs lasting up to three whole minutes (quite a difference from CVA: their debut 17 track album that lasts about 18 minutes). However, these longer songs are slightly deceiving: at the end of many of the tunes are ambient soundscapes, which I’m not exactly sure can be counted as part of the song. In some tracks such as “We Will Not” and “Gravity Wins”,this ambiance finds its way in the main structure of the songs, providing a darker and more dramatic element to the album. Many bands try to experiment with their sound, but few pull it off as well as Paint It Black did. The secret? Paint It Black manages to experiment with their sound without alienating their fans.

The urgent, pissed off vocals are still raw as ever, and some songs such as “New Folk Song” and “Saccharine”, to the anthematic singalong of “Shell Game Redux” are very reminiscent of earlier albums.

I’d highly recommend this album to any fan of punk-hardcore, and while it’s way to early to be calling out albums of the year, I can almost guarantee this will be on my list. Oh, and if anyone is going to see them in NYC and Philly with Strike Anywhere… I’ll see you guys at the show.

Terror – Lowest of the Low EP (For fans of Madball, Death Before Dishonor, Throwdown)

Coke Bust – Lines In The Sand (For fans of Ceremony, Punch, Paint it Black)