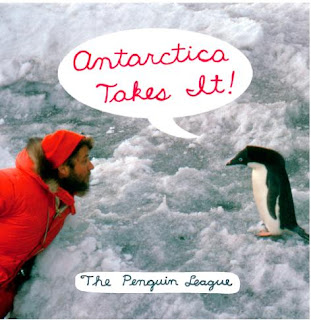 Awhile ago I wrote about Antarctica Takes It! Being the intrepid reporter that I am, I sent them some questions:

I love the cover art for your album The Penguin League, who is that with the penguin?

The cover art is a photo of explorer Charley Hollister and an Adelie penguin taken by Sam Silverstein in 1967. I had originally discovered the photo in an old National Geographic at a friend’s house. I later came into contact with Mr. Silverstein and he is quoted in the HDIFTBL remastered version’s booklet saying:

“When Charley Hollister and I learned of the discovery of ‘s highest peaks we were determined to mount an expedition to climb them. The photograph on the front of this CD booklet shows Charley playing hide and seek with an Adeline penguin at ‘s (Ernest Shackleton’s 1908 base), in , January 1967. He and I had just returned from participating in the first ascents of ‘s highest peaks and were in a very happy and carefree mood. I don’t know what the penguin thought about Charley’s antics, but I never tired of them. He was a wonderful friend. He made life fun.” -Sam Silverstein.

What were your favorite albums of 07?

Jens Lekman’s “Night Falls Over Kortedala” has been in my car CD player for about 3-4 months. I still can’t grasp how tight and catchy the songs are. I got to see him play in last December and was really just blown away by the performance.

My friend Tyler’s (who plays keyboard, horns, ukulele in ATI) band, James Rabbit completed “Coluratura” at the very end of 2007. It’s hard to describe the sort of energy that courses through this album

One of the albums that I discovered this year was former Zombies singer Colin Blunstone’s “One Year” (although I actually picked up the collection “Some Years”). It’s full of these amazing songs that are just Colin’s ethereal voice accompanied by string orchestrations. I think it originally came out in the early 70s?

How do you find out about new music?

What would you say your influences are music or otherwise (literature, film, visual art, etc.)?

One of my favorite bands as a teenager was Belle & Sebastian. It was one of the first bands that I sort of just stumbled upon and had this revelation that great and wonderful music existed, I just had to go out and find it. I also fell in love with Stuart Murdoch’s introspective characters and Velvet-Underground-Stephanie-Says-type third person storytelling.

“The Song is You” is about a movie that came out in 2003 called “The Saddest Music I The World”. See the movie!

If Takes It! was a Teenage Mutant Ninja Turtle, which turtle would you be and why?

As a kid, my favorite was always Donatello, but hopefully the band would be Michelangelo.

What do you think the biggest benefits and limitations are to working without a label?

Record label/Club “How Does It Feel To Be Loved” recently remastered and re-released The Penguin League and it has honestly been a pleasure working with them. Not having a label in the States has been nice though. There’s no pressure to tour or pump out albums so I can write and record at my own leisure. If I were more serious about selling albums and playing shows I think a record label would be necessary.

Do you guys currently have day jobs? What are/were they?

I am working at an after-school program, Maria has a teaching job at a , Vanessa is a librarian in SF, and works with disabled adults in SC county.

In your message for people buying the album, you ask for a return address and maybe a picture or note. Have many people drawn you pictures? What are some of your favorites?

I just recently included that message to try to encourage people. We’ve gotten pictures of people’s cats, doodles and drawings, and one person sent in a picture of a hot-dog cart. It’s been pretty great.

Do you have plans to tour outside of the West Coast anytime soon?

Not really. Touring and booking shows is pretty exhausting. But we’re glad to play shows if other people want to set them up.

What did Antarctica Take? In other words, what is It?

The original idea was to have Antarctica Takes It be like some kind of frosty baseball team who wins the World Series. “It” being the World Series. That idea kind of got lost along the way. I’m not sure what “It” means now though, hopefully people’s hearts, or if not that maybe just their ears.