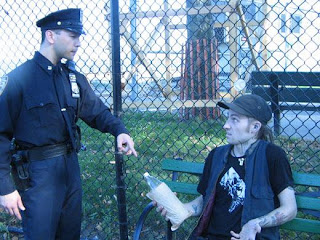 Is there a better way to start your month then going to a Leftover Crack show? I think not. Last night I went to go see them at the Trocadero, and my predictions of it being completely packed was correct. I went a little later, so I got there just in time for Mischief Brew.

Mischief Brew is a punk/folk band from Philly, and while most of their recorded stuff is acoustic, they play plugged in live. Sounding like a mix between World Inferno Friendship Society and Against Me!, they completely rocked last night. With almost the entire crowd singing along, a pit broke out for the majority of the set. Not bad for a band 3rd up on the list.

Holy shit, what the fuck just happened? Witch Hunt completely, completely SHRED last night, and as the first time even ever hearing of them, I was blown away. Playing straight up crust punk with mixed guy-girl vocals, a giant pit broke out with about 14 people moshing around. The rest of the crowd didn’t know what the hell to do. If they come around you’re area… DEFINITELY go see them.

Ahh… finally, the reason I came to the show. The floor was way too crowded with suburban punks to possibly have a good pit going, but that didn’t stop everyone from trying. From the opening of “Homeo-Apathy”, it appeared that STZA seemed a little intoxicated (surprise!). The first half of the set seemed to lack a certain energy (could be because it was so crowded), but things improved with the second half of the set. Nonetheless, they put on an enjoyable show, even though there wasn’t any room to mosh/skank do any dancing what-so-ever (which really hurts when “Gay Rude Boys Unite” is being played). I’ve always heard about how offensive the band is on stage, but they were surprisingly tame last night.

Highlight: STZA telling a hilarious story about why he hates cops. “When I was a little kid, there was a cop, and I just got ice cream, and I dropped it. The cop pointed and laughed and said “hey kid, you dropped your ice cream” I hated cops since.”

Setlist (not in order and from what I remember)

-The Good, The Bad, And The Leftover Crack