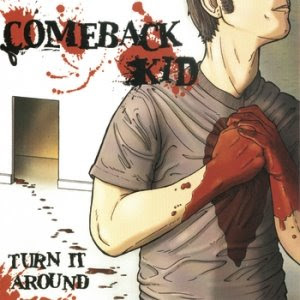 You can say whatever you want about Comeback Kid, their first release “Turn It Around” is solid hardcore gold. While their second release “Wake The Dead” is what shot these Winnipeg kids in the light, I find “Turn It Around” by far their most superior release. While I don’t listen to it very often, it definitely is perfect some days.

Straight up hardcore and taking heavy cues from Bane, “Turn It Around” is a complete onslaught with a bag of complimentary gang vocals (a 500 lb bag). Heavy, fast, and pissed off in that “posi” sort of way, definitely one to check out or rekindle with if it’s been years since you’ve listened to it.

(PS: I’ve only seen Comeback Kid once, and I felt completely gypped… It was the day after their lead singer quit the band, and so I pretty much saw Figure Four covering Comeback Kid, as I think the dude’s voice is what helps distinguish Comeback Kid from the rest. Oh well, I got to see Ignite.)

Comeback Articles:
Scenester 101: How To Be An Old School Hardcore Kid In 10 Easy Steps!
Kids Like Us (Daaaamn good hardcore)
Bane