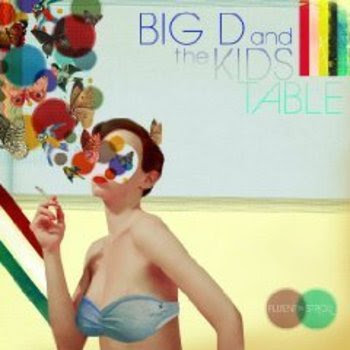 Big D and the Kids Table has been one of my favorite ska-punk bands for the longest time now, and one I’ve seen more times than I can keep track of. While initially I wasn’t a huge fan of Strictly Rude (and posted about it), the album eventually grew on me. Where older albums like Good Luck were straight ska-punk, Strictly Rude was a straight up ska/reggae/dub album, Fluent In Stroll simply has ska undertones. Wait. What?

Yes. You read that last sentence correctly: Big D’s latest album isn’t a ska album. Released on 7/7/2009, Fluent in Stroll is definitely the product of Big D experimenting with different styles including blues, jazz, funk, mariachi, lounge, etc. While some of the songs are ska songs that feel like they could be off of Strictly Rude (Chin Up, Boy!), most of the songs ska influences are subtle.

Big D also introduced a new call-response style female vocals that are reminiscent of The Soviettes or the B-52s. While it works in most songs (Doped Up Dollies), there are some where they feel completely out of place. I was also surprised by the complete lack of punk. There aren’t and ska-punk jams on here at all, or any noticeable punk influences.

The lyrical content is a bit different too. No longer are there songs about passing out on shag carpets or lighthearted songs about turtles and frisbee. Instead, about 90% of the songs are straight up love songs, or encouraging friends that they will too be in love one day.

I’m not exactly sure how I feel about Fluent In Stroll yet. The songs aren’t bad by any means, but they seem to lack the energy that Big D and the Kids Table is famous for. While I don’t hate the album, I honestly don’t see this one in my regular rotation often.

Mp3:
Big D and the Kids Table – Doped Up Dollies On A One Way Ticket To Blood

Buy:
Side One Dummy

Minor Threat: The Best Band Ian MacKaye was in