I headed out to a random house in West Philly on a whim last Thursday to go catch Philly’s up and coming hardcore kids, Lighten Up. When I got to the “Terrordome”, I realized that I actually knew the dudes who live there… random. The place was intimate and the perfect joint for a house show, with the bands playing in what looks like would be their living room/dining room. 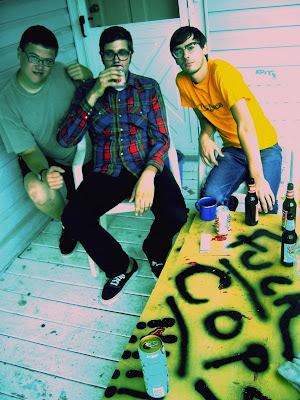 The Helloids trekked out from Long Island to play the small show to about 30 people (and that’s including the bands). They got things started by playing some solid, catchy punk rock. Unfortunately I couldn’t hear any of the vocals, but the music was tight.

Teenage Whore Moans
Besides having an awesome name (I’m a sucker for a clever pun), Philly’s Teenage Whore Moans put on a much better show than the last time I caught them, where they broke a string and couldn’t find a replacement.

Playing garage punk in the veins of the Teenage Harlots, they got the small crowd moving a bit with their catchy as hell jams. The band seemed on tonight, and the guitarist/singer often made his way into the crowd. 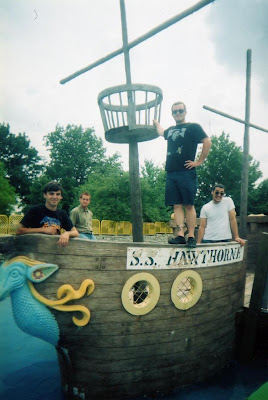 The reason I came to the show. Philly’s upcoming Lighten Up released “Absolutely Not” in June, and it has been what of the best releases that I’ve heard all year (and trust me, I’ve listened to a lot of new releases as of late). Dubbed as the next Kid Dynamite (ok… maybe it’s just me who calls them this), Lighten Up played a solid, quick, energetic set (just like their album) that had a small but dedicated pit going through out the show. I don’t rememeber the setlist, but highlights include “Invisible Checks”, “Dolphins Are Sharks With Good Publicity”, “Buttspeak”, and the ridiculiously anthematic “Absolutely Not”.

If these dudes played shows a little more often, I can see them getting big really fast. It’s rare for a band to take the ferocity of Minor Threat and Kid Dynamite, and still having your own sound shine through.

Tenament
These Wisconsin rockers are currently touring the country. Although it didn’t really seem like anyone in the crowd knew who Tenament was, they won some fans over with their pop-punk. I couldn’t help but think of the Descendants when hearing them. Their live music is much more gritty and raw than their recorded work, and they definitely put on a good show. If they come around your area, check em out.

Check Out:
Lighten Up! – Absolutely Not!
Paint It Black – Amnesia (New EP!)
The Steal – Bright Grey
The Steal – Self Titled