Philly’s This is Hardcore 09 (Bane, Ceremony, Reach The Sky)

Jesus, I’m seriously not going to be able to move today after yesterday’s “This Is Hardcore” show in Philly’s Starlight Ballroom. While the event was taking place all weekend, I only headed out at the end of Day 3 because I was only interested in a few bands.

One thing I have to say, mad props to Philly on two things. Firstly, I was expecting a complete bro-fest at the show (like most hardcore shows), but there was a surprising number of girls there, so props for that. Secondly, I was hesitant to go at first because these types of shows often attract those tougher-than-thou guys who are always trying to start fights and whatnot… The show was insane, but when someone fell or got hurt stage diving (or by a stage diver), everyone was right there to pick them up, and not a single fight started (at least when I was there). The only thing that really sucked was losing $20 (fell out of the pocket), and in the scheme of shit, that’s not too bad. 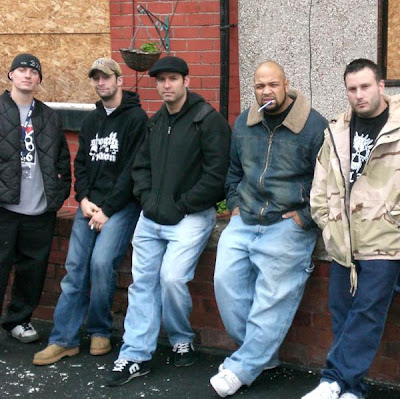 I had no idea who these dude were before seeing them, but they were a good warmup to get me pumped before Ceremony took the stage. Coming straight out of Pennsylvania, although they call themselves PA Hardcore, they had a sound very similar to NYHC, such as Agnostic Front and Sick Of It All. 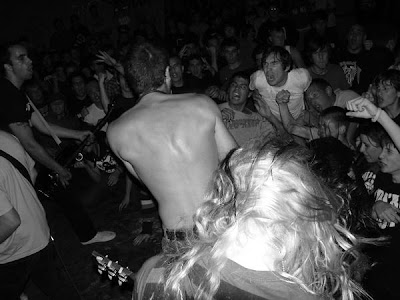 Hooooly shit! The reason I came out to this show in the first place. Back when I saw these Bay Area dudes play with Paint it Black a few months ago, I was completely blown away by their live performance that I wound up getting really into their recorded work as well, and needed to see them again. Playing their brutal “Some Girls” esque hardcore to a well responding audience, who were constantly mic grabbing and piling on the vocalist (when he wasn’t stage diving into the crowd).

They put on a hell of a show, and the frontman is possibly the craziest dude I’ve ever seen on stage (choking himself with wires, stuffing the mic in his mouth, constantly flipping into the crowd). Setlist (in order) 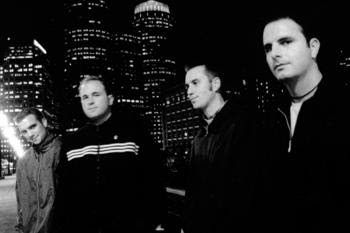 Holy 1999! Reach The Sky reunited to play “This Is Hardcore”, and I missed the first 2 songs (I was looking for my $20 and they set up a LOT faster than I thought… damn it), but I made it just in time to hear “Let Us Be Damned” and “This Sadness Alone” (I think)… I’m not too familiar with their catalog, but I do like the band a lot, and need to grab a few more of their albums (I only have Friends, Lies, And The End of the World).

The band was signed to Victory Records, and they stated: “If you liked us tonight and have never heard of us, please support us by going online, and downloading the shit out of our music. Don’t buy it, Fuck Tony [owner of Victory Records].” So you heard the band, go find their music, it’s tight. Think Grey Area, Kid Dynamite, and other awesome melodic hardcore bands.

Highlights:
-Catch The Last Train
-Let Us Be Damned
-This Saddness Alone
-Maybe Next Year

Philly hardcore band, with Andy from Paint It Black filling in on guitar for them. I wasn’t a huge fan, but the crowd went batshit crazy for them. Darker hardcore, so if you’re into that, you’ll dig em. 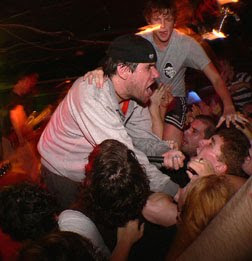 I’ve been listening to Bane for years now, and never had a chance to see them. Finally I got to see these legends. By the time Bane came on stage, the dude running the show (Joe Hardcore from Shattered Realms and Punishment) didn’t even try to police the stage, and instead brought out signs rating people’s stage dives (from “Go Home” to “Holy Shit!”).

The dudes in Bane are older now, but that definitely does not slow them down. Vocalist Aaron Bedard was stage diving into the crowd like this was his first show, and the entire band just had such an energy to them. Their set consisted of constant stage dives [including one by yours truly… who unfortunately dove right after a rather large dude did and took out a lot of the crowd… meaning I landed straight on my back on the hard floor… still feeling that one.)

Sadly, Bane didn’t play the one song I wanted to hear (Speechless), but they had an admirable set, with some highlights including:

-Ante Up
-Some Came Running
-What Holds Us Down

The only weird thing about their set was their choice for an encore… I forget the name, but it’s a slower song and the crowd wasn’t doing much due to the mid-tempo jam. Still, a ridiculously explosive set.

MP3:
Ceremony – He-god-Has Favored Our Undertakings
Bane – Speechless (since they didn’t play it)

The Replacements- Putting On The Ritz (Live- 1987)