Last Saturday night, I headed out to the sold out None More Black, 7 Seconds, and Bouncing Souls show at Philly’s Trocadero. Since this was a lineup that I definitely did not want to miss, I made sure to get there damn early. After waiting in the torrential flood for a good 25 minutes, by the time doors opened, I (and the majority of the crowd) looked like we all decided to go deep sea diving with our clothes on.

They were showing a little video the Bouncing Souls put together for their 20th anniversary (holy shit, we’re getting old), and while a bit cheesy, it did give us something to do while the bands set up. 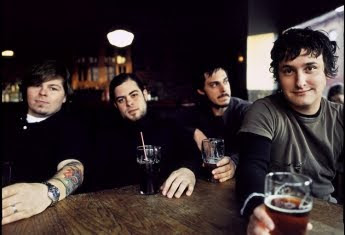 I’ve been a pretty big fan of None More Black since their first release in 2003, but I somehow never had the chance to see them live, so needless to say, I was pretty fucking stoked. While they played really tight, the crowd didn’t really move much (except for me and a small handful of dedicated fans), although most people in the audience did sing along to every word. I couldn’t have asked for a better setlist, as they played all of my personal favorites, including “Drop The Pop”.

Setlist (From memory, not in order)
-Genuine Malaise And Misery
-Banned From Teen Arts
-Everyday Balloons
-Drop The Pop
-New Song
-We Dance On The Ruins Of The Stupid Stage
-My Wallpaper Looks Like Paint
-Oh There’s Legwork

7 Seconds:
Hoooooly shit! Is this actually happening? Am I really seeing the legendary 7 Seconds?! After nearly 25 years, the band still fucking has it. Music is still energetic, fast, and they slay it live.

I was expecting a batshit crazy time in the crowd. But seriously, what the fuck? Philadelphia, I am disappointed in you. One of the pioneers in hardcore comes around, and barely anyone moves? It actually seemed like 3/4ths of the crowd didn’t even have any idea who these guys were… and I must say, I’m pretty embarrassed of my adopted city right now. Regardless, the crowd finally got moving once the band played 99 Red Balloons. The band played almost all old songs (err… since all the songs are old, I’m talking “The Crew” era.)

I’m a bit jealous of you NYC cats who got to go see them at Webster Hall, as apparently there wasn’t a barricade, and it was just nonstop stage dives… we had to deal with that barricade/bouncer shit here in Philly (bands… stop playing the Trocadero. There are 283712784 million other venues here).

Highlights include:
-Not Just Boys Fun
-99 Red Balloons
-Young Til I Die
-If The Kids Are United 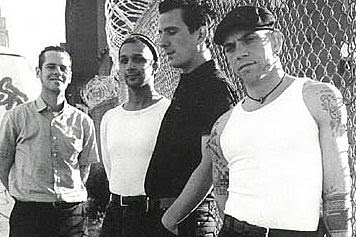 This was going to be the 13th time I’ve seen these fucking New Jersey moochers since the first time I saw them at Skate and Surf back in 2003, and they’ve been my favorite band for almost 10 years now. While I was a bit underwhelmed with the Gold Record and a lot of the songs they released this year seem a bit like filler to me, these guys still blow me away live every time I see them, especially when they dip into their back catalog. Tonight was no exception.

The thing about the Souls is the type of crowd they attract. You’ve got punk rockers, hardcore fans, ska kids, hipsters, and even some bro types at their show. There’s something about my home state representatives that just appeal to everyone. Almost the entire crowd was shouting along to every word that came out of Greg’s mouth.

In the middle of the set, the Bouncing Souls had Lou from Sick Of It All come onstage and do a SOIA cover (which the Philly crowd broke into one huge hardcore pit, apparently we don’t like 7 Seconds, but we like NYHC? Cmon guys… roots).

Solid setlist, with mostly older songs, and a nice collection off all of their albums.

Encore
-The Gold Song
-Kids And Heroes
-Night On Earth