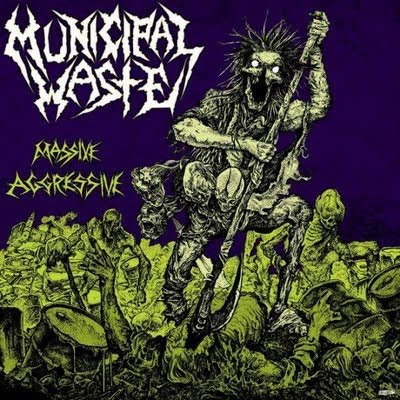 Lords of thrash Municipal Waste don’t really need a proper introduction. These Richmond revivalists resurrected the previously thought dead genre of cross-over thrash back in 2003 with “Waste Em All”, brought it to the limelight in 05 with “Hazardous Mutations”, and nearly god-damn perfected it in 07 with “The Art of Partying”.

I’ve read a lot blogs that were disappointed with the latest, claiming it to be be boring, slow, and have dumber lyrics than the other albums. While the Massive Aggressive does seem to have a bit more songs that are chuggy, the boogie boards will still be flying at their live shows with melt-facings such as “Wolves of Chernobyl” and “Divine Blasphemer”.

Municipal Waste does dive in new territory lyrically, singing songs about politics (“duuuude, politics has no place in a party… except a political party man…”), and it’s good to see the band tread some new terroritory.

If you’re new to the Waste, I’d start with The Art of Partying, but any fan of thrash should check out Massive Aggressive.

If You Took Off Labor Day, You’re A Socialist (Mix)