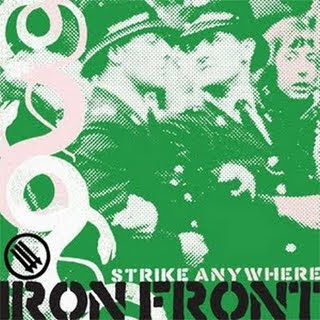 Strike Anywhere’s highly anticipated Bridge 9 debut “Iron Front” was finally released to the masses yesterday (October 6th). Back in 2007, when the band released “Dead FM”, Strike Anywhere sacrificed a bit of the raw aggression for more melodies, and it damn well worked for them.

Iron Front is the logical progression to their last release. The band mixes the aggression of “Change is Sound” with the harmonies of “Dead FM” as heard on songs such as “Failed State” and “Invisible Colony”. Lyrically, you know what to expect from Strike Anywhere: pissed-off-call-to-action-music.

The beginning of the album starts out really strong, but seems to lose some steam towards the end (although they are definitely growing on me). The songs on Iron Front translate much better live, and have a much more raw aggression to them.

In all honesty, if you didn’t like “Dead FM” you probably won’t like “Iron Front” all that much. Iron Front definitely doesn’t top “Dead FM” as it seems to be lacking a certain “holy shit” factor that Change is Sound and Dead FM have, but it’s still a solid album that should be any fan’s collection of melodic hardcore.

Fun fact: Strike Anywhere’s logo was taken from the Nazi resistance group in Germany, named the Iron Front (hence the title of the album).