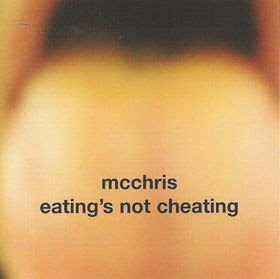 I’ve been listening to mc chris’s “Eating’s Not Cheating” quite a bit as of late. The 3rd release from self proclaimed cartoon nerd rapper, it took me a while to get into this release as a whole (some singles on here are solid),but now it is one of my favorites by mc chris.

“Eating’s Not Cheating” has a lot of more straight up hip hop influenced songs such as Toothpick Spliffs, tractorbeam, and mynameis. With mc chris’s clever (and hilarious) rhymes rapped over lots of synths and catchy beats is the formula that makes this album flow. Songs like “mc chris ownz” show his non-traditional rap beats (not to mention lines like I spell word with a 3 / name’s mc / other rappers flow weak like window unit ACs).

mc chris is also quite the story teller, as heard on the juxaposited song Ratz, which tells the story of two highly mismatched roommates over one of the sickest beats I’ve ever heard in hip hop.

Highly recommended if you love hip hop that doesn’t take itself too seriously.