I’ve been waiting for this show for way too long. On Saturday, I headed out to Philly’s sickest hangout living room around, The Terrordome to catch pogo kings Blanks 77 with street punk legends Violent Society. The place was jam packed with mohawks, studded jackets, and 40s, and it’s a damn good thing alcohol isn’t absorbed through the skin… 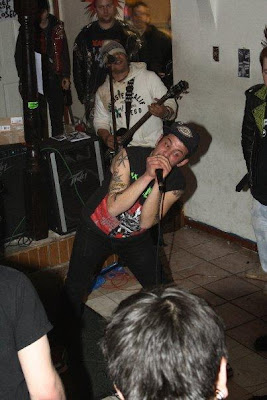 First up were Philly/Reading PA’s The Unpatriotics. Playing solid street punk in the veins of The Unseen, these guys had a slow opening, but the crowd eventually warmed up and had a pit going for the majority of the set. The lead singer was the majority of their stage (err… floor?) presence, and kept running into the crowd with the microphone. I thought their set was a bit long, but there seemed to be enough time for all the bands to play a decent amount. I don’t know how their recorded material is, but live, these guys killed it. 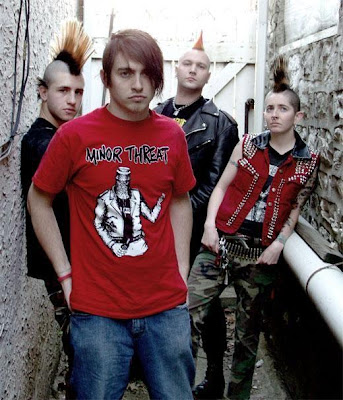 Holy shit! How have I never heard these dudes before? Female fronted, brutal as shit street punk. It was obvious the majority of the crowd was there for them, as they had the biggest pit all night (although quite honestly, all the bands had people going apeshit). The vocals reminded me a lot of F-Minus, and if they come around your area, check them out. I definitely was made a fan that night.

Violent Society
[youtube=http://www.youtube.com/watch?v=ExLyGqFwcXk]
Yes! One of the two reasons I came to this show to begin with. I’ve never had the pleasure of seeing these guys before, and was beyond stoked. Opening up with my personal favorite “I Wanna Know” and blasting straight into my other favorite “It’s Only Your Life”, Violent Society kept the crowd (and myself) rowdy throughout the entire set. They claimed that this was their last show ever, but I’m pretty sure they were full of shit (or at least, I really, really hope so). I was surprised by how tight a street punk band could actually play.

Blanks 77
[youtube=http://www.youtube.com/watch?v=KbHSCPtVUfo]
Ahh… NJ pogo kings. Another band that doesn’t play nearly enough… Somehow, I’ve never managed to catch their rare show before and it was made extra awesome by the fact it was played in a living room, which they claimed “we haven’t played a house in a really, really, really, long time”.

Their set was plagued with sound problems, such as the microphone not even working for the first song at all, and then the guitar kept cutting out the majority of the set, but that didn’t stop the place being a complete rowdy shitstorm. I was hoping to hear more off of C.B.H than they played, but hey, any Blanks 77 was solid enough for me (although, boo on them for actually having “Radio Hits” on their setlist, and skipping it!). A good show, and hopefully get to see them live again before they call it quits for good.

Highlight of the show: when Blanks 77 got the majority of the crowd to sing Lady Gaga’s Bad Romance…

Setlist:
Losing My Brain
I Don’t Wanna Be
Drag
Sick
Party Train
We Don’t Need You
Void
Up The System
Police Attack
Let’s Riot
Suburbia
Love Sick (New)
Pills (New)
No Big Deal
Chelsea Girls
We Are The Punks
I Wanna Be A Punk

These Are Relevant To My Interests:
Blanks 77 (A Haiku)
Violent Society
The Unseen – Lower Class Crucifixion
The Virus – Nowhere to Hide