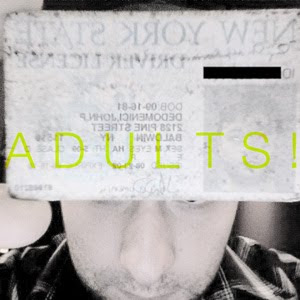 Holy shit, they’ve done it again. Bomb The Music Industry, without notice or any warning what so ever, go and release a 7 song (well one is a 30 second interlude) EP “Adults!!! Smart!!! Shithammered!!! And Excited By Nothing!!!”.

Recorded and mixed within 5 days, “Adults” is exactly what you would expect from Bomb The Music Industry by now, high energy ska influenced songs mixed in with some slower ballads. I usually skip over some of the slower songs in past releases, but “All Ages Shows” is actually one of the better slower jams BTMI released.

The faster, majority of the album would sit somewhere between “Get Warmer” and “Scrambles”. For example, “You Still Believe In Me?” reminds me a lot of “Stuff That I Like” while “Slumlord” actually sounds like it was recorded during the “Get Warmer” sessions. Meanwhile “The First Time I Met Sanawon” sounds like an Arrogant Sons of Bitches song (which is never a bad thing).

Does “Adults” hold up to the pinnacle release of “Scrambles”? Not exactly, but it comes pretty close. Oh, and they release it donation-based, so even if you think it sucks, then just download it for free.